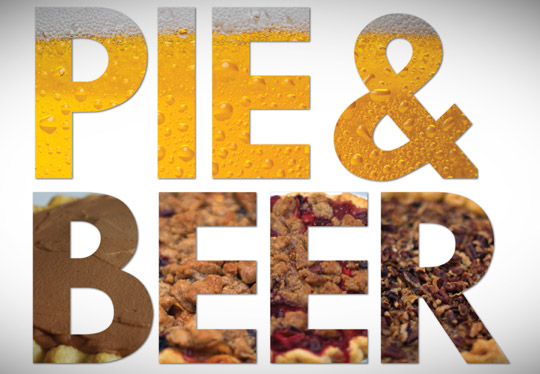 I recently made a Cream Ale with strawberries and call it “Nan’s Strawberries & Cream Ale” after my Wife. It really does have a nice strawberry flavor but I wouldn’t say it really tastes like straberries & cream. I am not sure it is possible to really make a beer taste creamy. I’ve often wondered what the “cream” in “Cream Ale” is refering to.

Adding flavor to beer is common and can be done is a myriad different ways. Flavors come from all sides: malt, hops, mash schedule, and adjucts. The adjuncts can be added in many different ways. I tend to gravitate towards the fairly easy method of adding them during secondary fermentation.

As for pie flavored beer, you need to answer a basic first question: What kind of pie? That will lead you to the next question: What Kind Of Beer? For instance if you want to do something that tastes like apple pie, then I’d expect you’d want to make a fairly light colored beer and add some apples and cinnimon. This comes to the third question: How to introduce the flavors into the Beer? Apple begs the question of whether to make a Graf or just introduce apples into the beer like any other fruit. If we are making a pecan pie beer, we have to decide how to get the pecans in the beer without adding too much of their fat (fat kills head retention.)
One of my old brew club members, Steve Anderson who is now Head Brewer at Red Brick Brewing Company in Atlanta and his brother Mike Anderson, once made a Carrot Cake beer that was phenominal. That’s not a pie flavored beer but some of the ideas behind recipe formulation are similar.

In order for a beer to really taste like pie you need to have a bready or biscuity flavor for pies that have traditional pastry crusts. There are many malts that can give the flavors. Getting the malt bill right will be key. For pies with graham cracker crusts, you need to get a graham cracker flavor in the beer.
Burnt Hickory Brewery makes a beer, “Big Shanty Graham Cracker Stout”, where they used the graham cracker pie shells you find in the super market to get the Graham Cracker flavor into it. I imagine they may use a different technique now that they have grown into a larger brewery. In any case, it is a very tasty beer.

I think hop selection also needs to be concidered closely. Must pie flavors would not benefit from overly hoppy recipes. However, if one were trying for a savory pie flavor (e.g. Chicken Pot Pie), the herbatious quality of hops would be appreciated (I am skratching my head over how one could make a Chicken Pot Pie beer.) But in general I think a low IBU beer is in order.

In most cases, I think a pie flavored beer should have a substatial mouth feel. This would push us towards a higher mash temperature. In most cases I would think a simple single infusion would be enough but for a pie flavor that features carmalized sugars, like pecan pie, you might consider a decoction step. However, I would think you could achieve the same effect by adding some dark candy sugar.